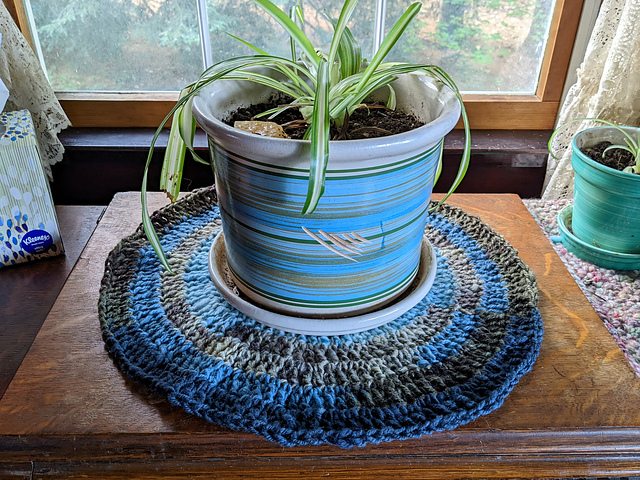 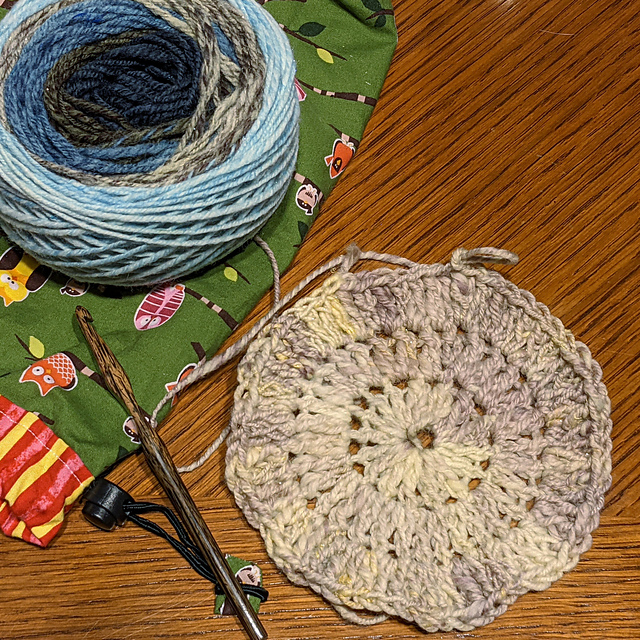 Yarn: Handspun that I have no record of regarding the fiber. Mystery!

I have no idea what this skein of handspun was or how much I have. I’m pretty sure it was probably a LOOP bullseye bump, but I can’t find any notes about it, soooo…it’s a mystery. LOL

I decided it would make a good crocheted mat for the plant on the sewing machine in the dining room. I started out using the [Mandala Coaster][1] pattern as a guide, but I had a “vision,” and wanted to change it up, only I ended up with a big ruffly monster, so I ripped back and decided to simplify it instead. I found this crocheted circle formula blog post that gave me a general guideline and it’s working out a bit better, though I still had to rip back after a while because it was going wibbly-wobbly again. But I’m determined to crochet a circular mat that is FLAT and not fluttery or cupped. I will do this! LOL

5/13 – Done. I ripped and recrocheted a good bit and it still ended up a little wibbley-wobbily, but I’m still happy with it. And my spidey plant does not care at all that it’s not perfect. LOL

The yarn was a total of 85 grams when I started and I used 77 grams. This was probably an aran weight, so roughly 1.8 yd per gram, so I used about 138 yds? I wish I could figure out exactly what handspun this was. :shrug: