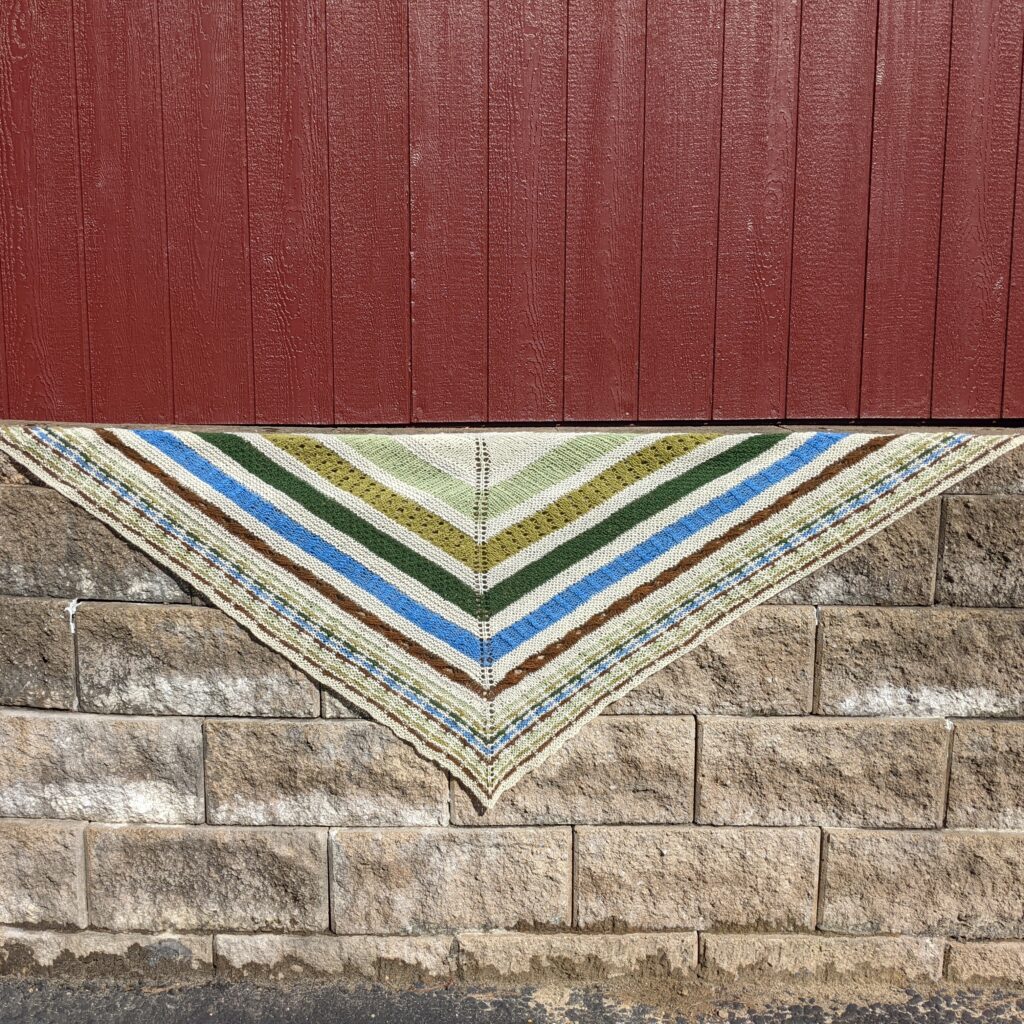 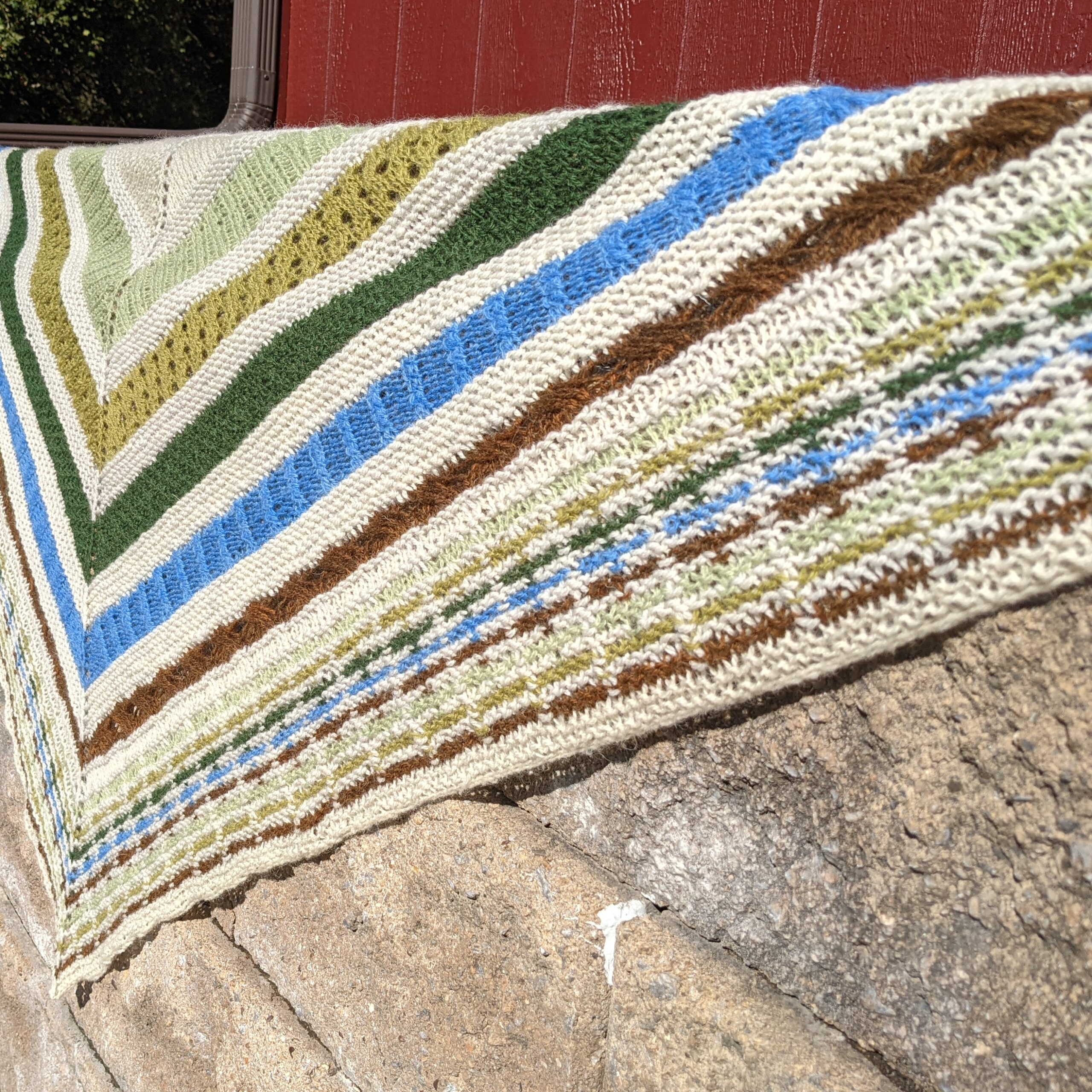 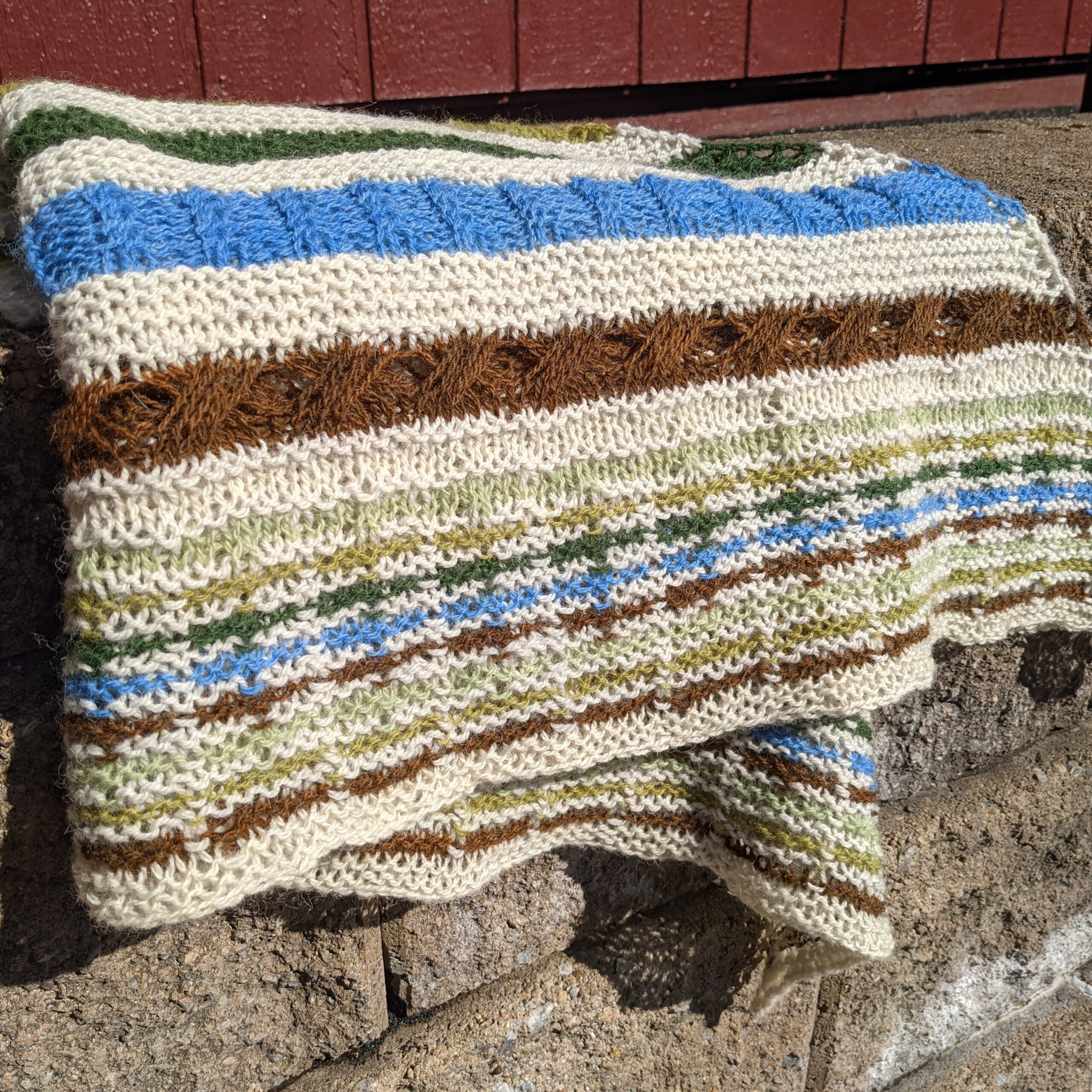 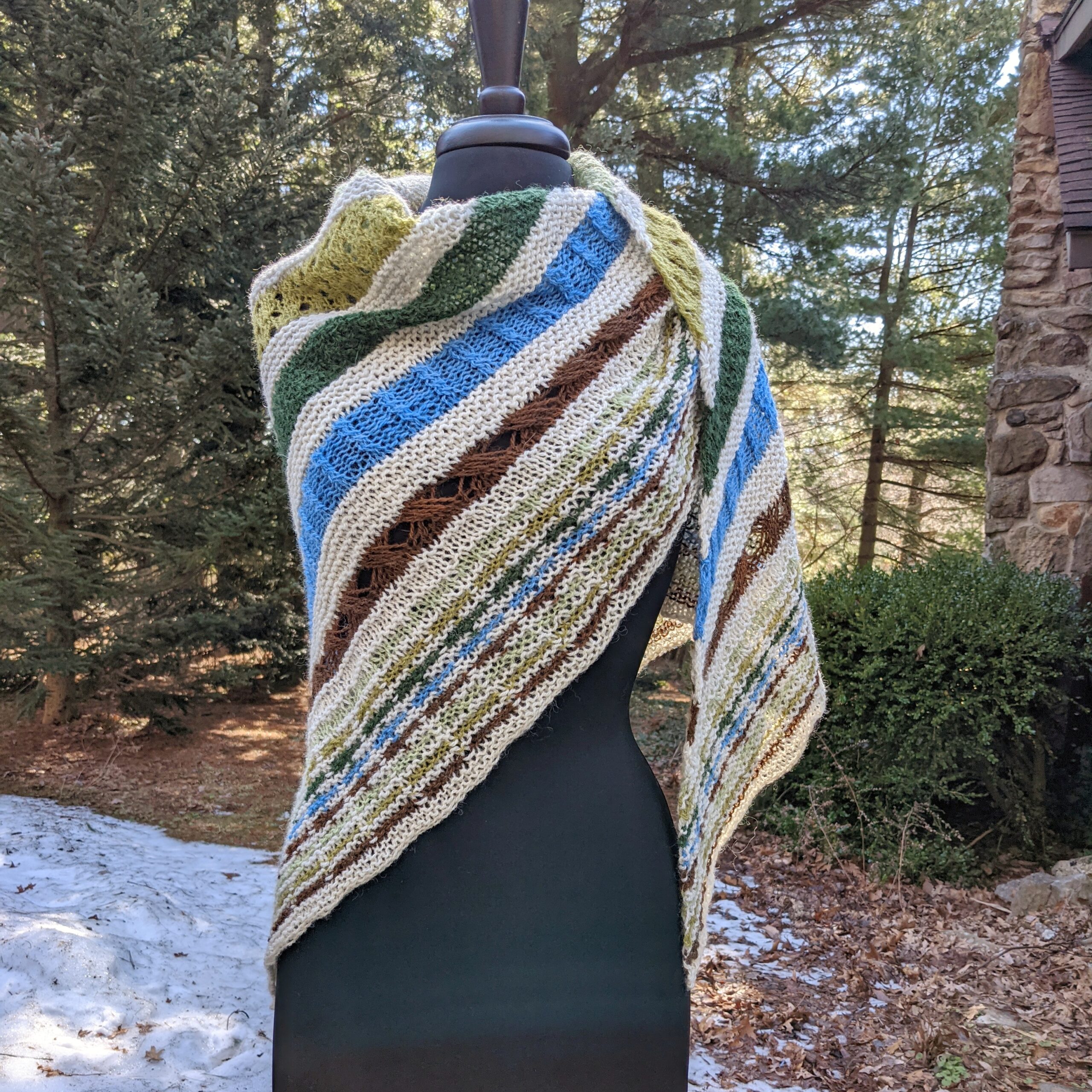 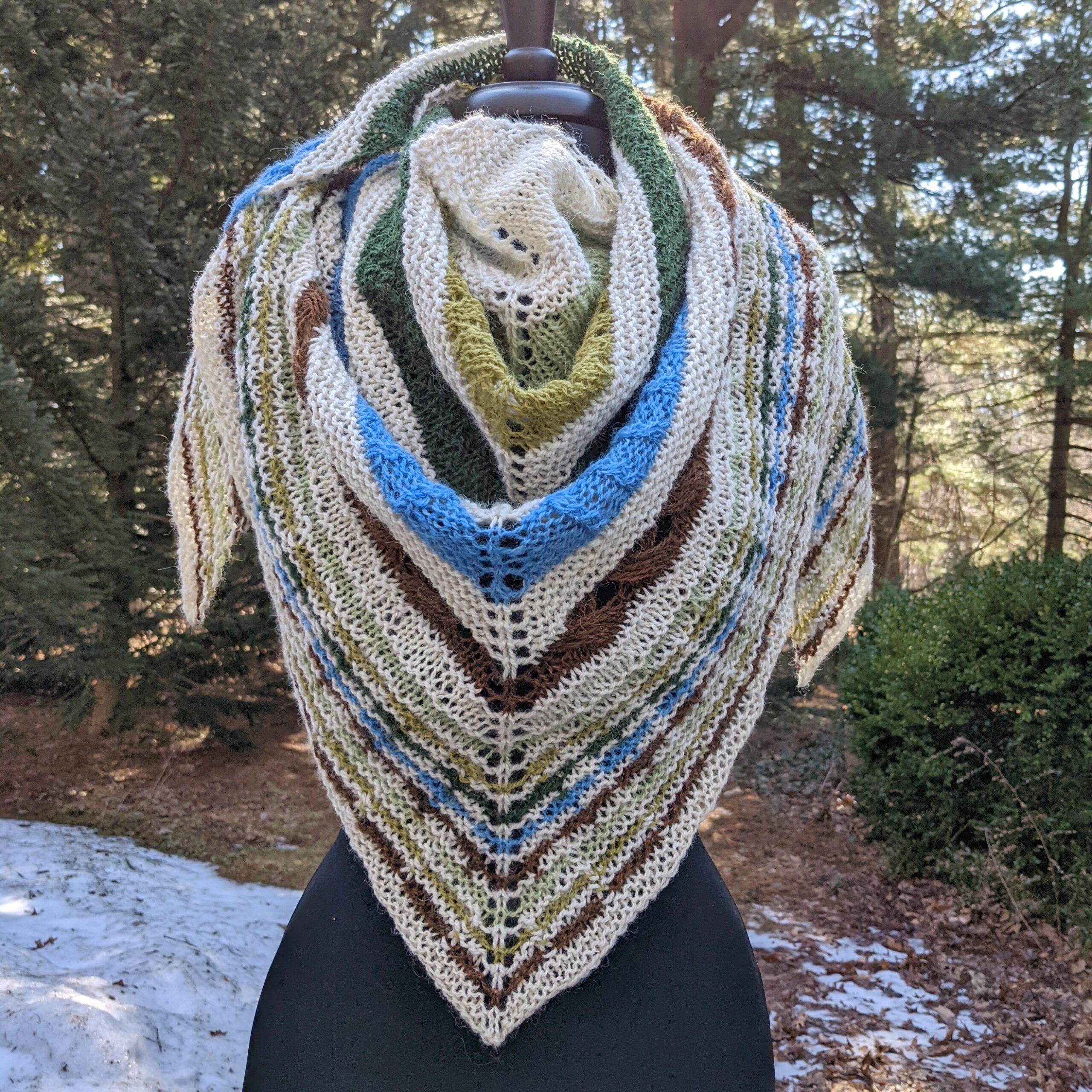 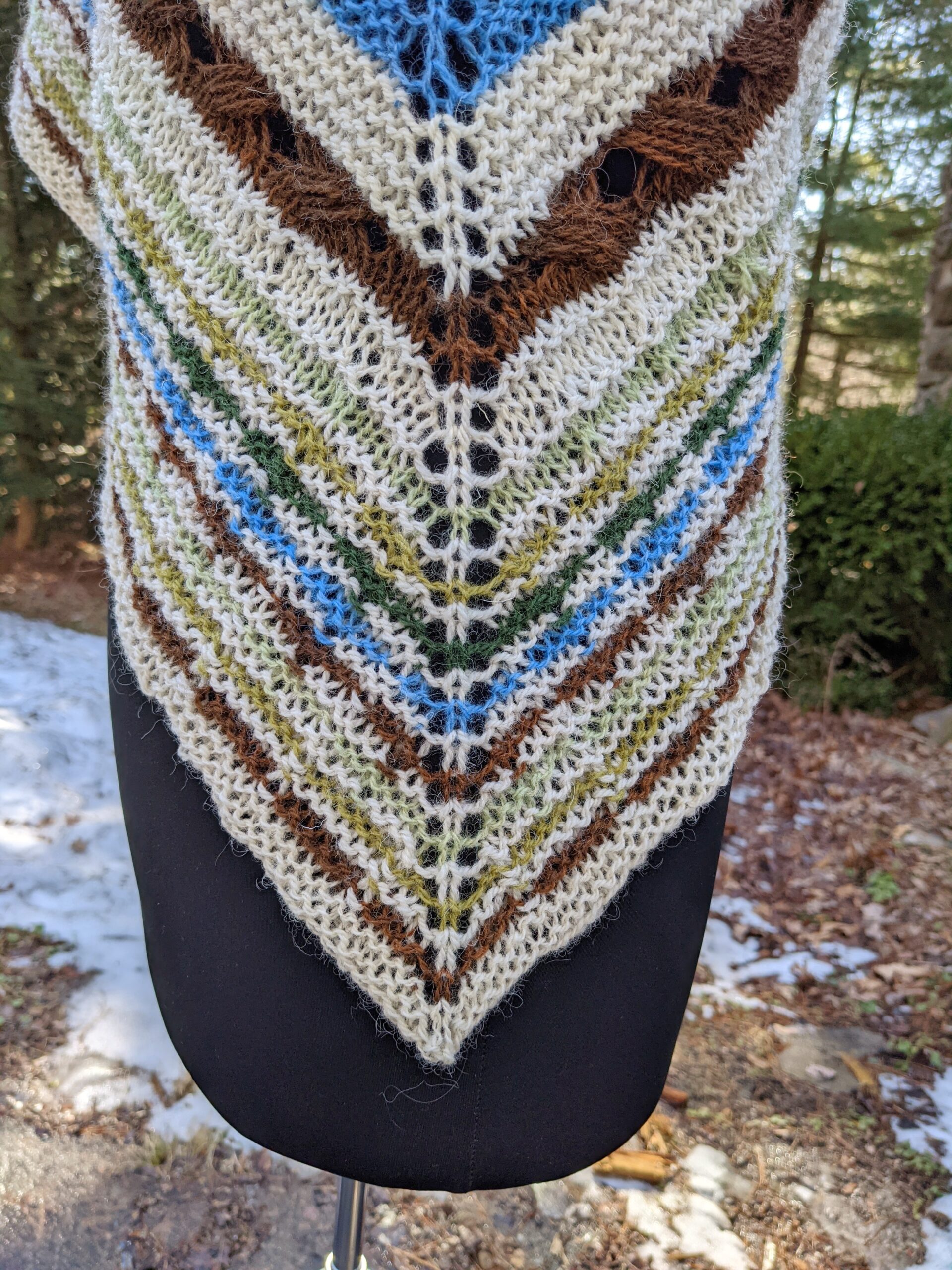 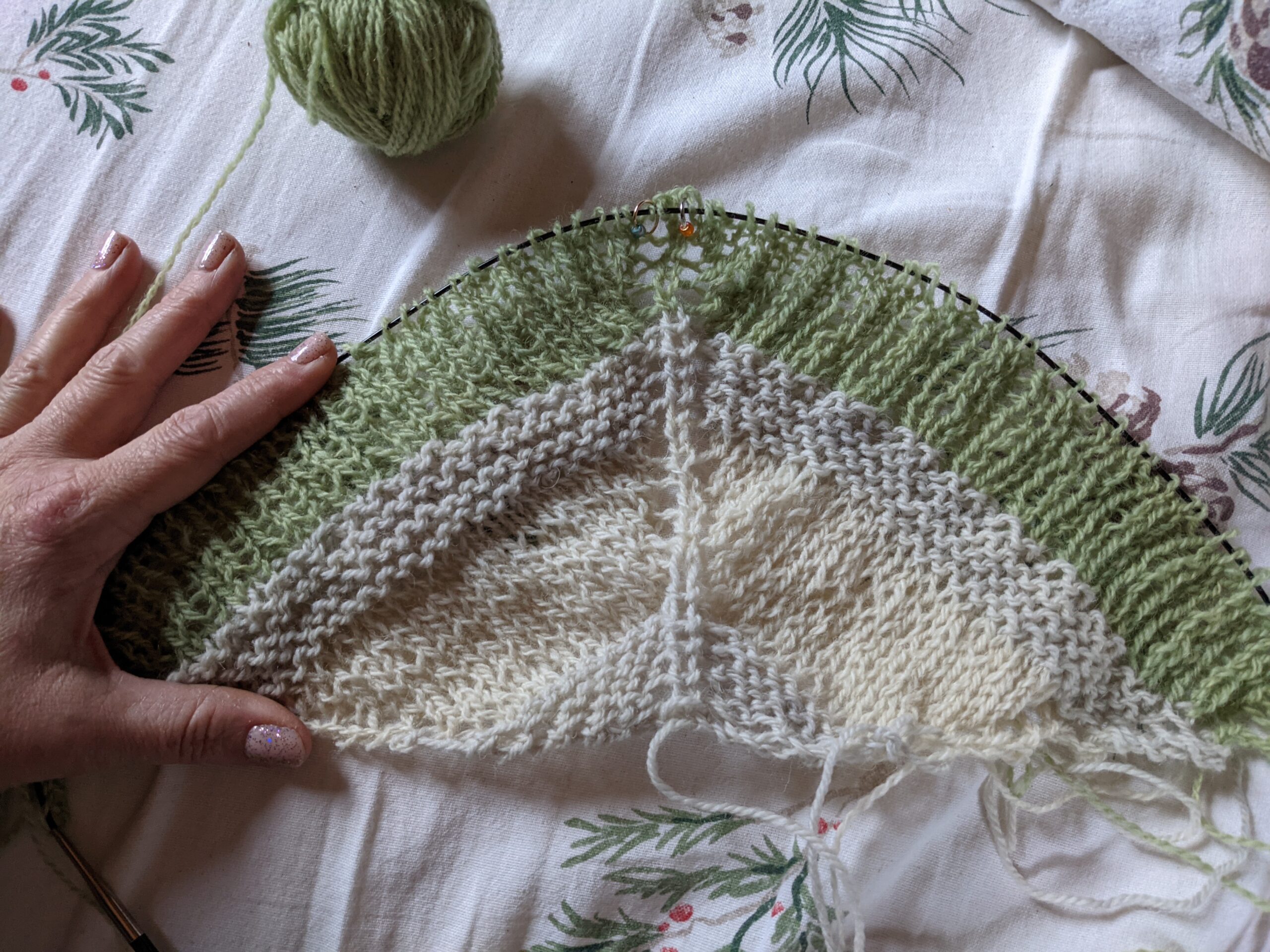 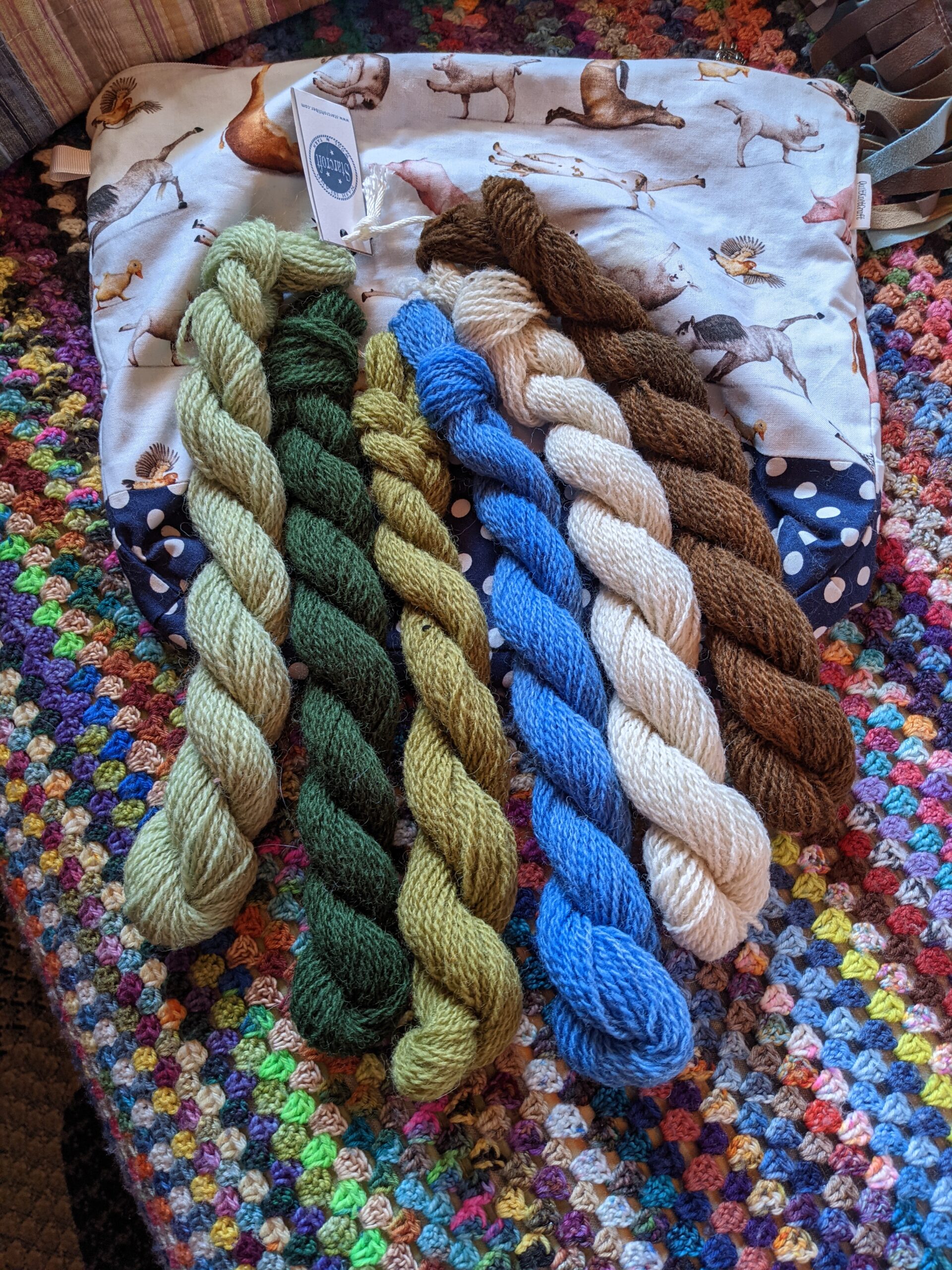 Yarn: Starcroft Fiber, Maine Island Wool, Tide Pool Mini set in the Rock Weed colors. I purchased this at a retreat in Maine in October 2017. I’m not seeing the same exact thing in the Starcroft shop, though there are yarns called Nash Island wool, so maybe they renamed them?

I’m alternating these with leftovers of light gray DK weight that I have in my stash, including some of my Ridgetop DK in Wisp (which isn’t currently available for custom orders).

My February Stash Yarn Challenge is a set of six 20-gram minis from Starcroft that I got at the Highlands on the Fly retreat in October 2015. I can’t find this exact yarn listed under Starcroft’s yarns here on Rav. My tag says “Maine Island” wool, not Nash Island specifically, so I’m thinking maybe this pre-dates when Jani started processing the Nash Island fleeces? I’m really unsure.

After searching for a good pattern, I found this one in my queue (or library? One or the other) and it is PERFECT. According to the pattern, I have enough yardage with just the minis (though several people commented that they ran short on yarn), but I’d like the shawl to be bigger so I’m adding in leftovers in light grays that I have. I’m using these for the garter sections between each patterned section, and I’m hoping to repeat some of the patterned sections with the colored minis as well. We’ll see how that works out. So far though, I’m loving how it is working up. The minis yarn is really pleasant to work with, toothy, but not excessively sticky or rough.

So far the pattern is going well, but warning: the whole thing is a giant chart, and if you print it out on 8.5×11″ paper, everything is SUPER tiny. Either have good eyesight, good light (preferably both), or enlarge the chart to print over two pages. On the positive side though, the motifs are easily memorizable, so it isn’t like you need to read the chart the entire time you’re working.

I used my Ridgetop DK Wisp for the blocks of four garter ridges and the minis for the texture sections in between. I (basically) followed the chart through the fourth textured section (not counting the garter ridges between), which was my dark green yarn. From there, I continued doing four garter ridges of Wisp followed by a texture pattern. For the blue, I did a 2×2 rib with every other K2 being a twisted stitch to form little cables. For the brown, I did a broomstick lace (I think it’s called that?). After that, I wanted to use up the rest of the minis alternating one ridge of Wisp garter with two rows of mini stockinette, putting slipped stitches every so often, alternating where they were in the Wisp versus the mini colors. After doing the first two minis in stockinette, I decided to just do it all in garter ridges as the slipped stitches showed up better that way (I didn’t bother to rip out those first two though, as it wasn’t a big deal to me). I love the effect I got alternating the Wisp and mini color garter ridges and the slipped stitches. I kind of want to design something that utilizes that now!

I ran out of Wisp before the final edge, so I finished the shawl with the undyed mini, and I won at yarn chicken in the bind off only by weaving in some previous ends and then spit splicing them to what was left so I had enough to bind off the last 7 stitches. LOL I only had 5 grams of the other minis left in total.

I blocked it rather aggressively so it’s a nice size. It’s really light weight too, but it’ll be warm. Probably will work better as a giant wrap than a snuggle shawl.