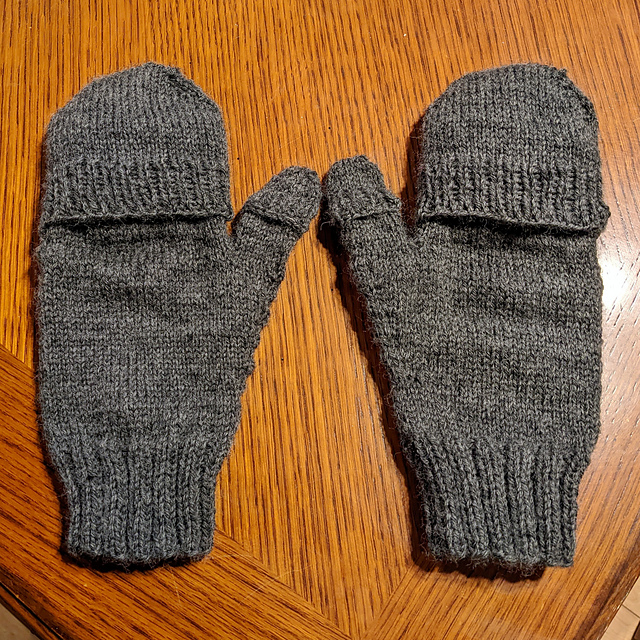 Pattern: Here’s the conundrum. I started out, apparently, using the Men’s Convertible Gloves pattern by Shady Sheep. However, somewhere along the line, I switched to following directions from a different pattern entirely, which I can’t recall what it was. I’ve thrown out the paper pattern I was using. I’ve deleted the download from my phone, and I can’t seem to find it anywhere. I have no idea how this switchover happened, but it did, and it’s pretty on brand for this project as it was kind of a shit show from the get-go, though through some miracle, the FO turned out pretty good.

2/20/20 – It took so long to get this yarn from Knit Picks last year that by the time it arrived, Christmas was almost here and I didn’t have time to knit these. I’m now heavy into show sample knitting, so I probably won’t get to these until later this spring at the earliest. I told Chris I hadn’t forgotten about them, and he said he’s basically forgotten about them, so I guess I won’t stress too much over it. LOL

(An aside after my reading that last note…in less than a month from when I wrote that, the pandemic lockdowns began, all but the first of those shows I was knitting samples for would not happen. Life has changed so much in that time. And yet the pandemic is still here. :worried:)

——-
12/19/21 – Fast forward two years. I’m FINALLY making these for Chris for a Christmas gift, two years late. :rolling_on_the_floor_laughing: I’m pretty sure he’s completely forgotten about them at this point, so they should be a surprise at least!

I cast them on Friday and they’re going pretty quickly. I’m working them concurrently on separate needles. I’m now to the point of doing the thumbs.

I never got past the first thumb last year because I was worried they were going to be too small. I put them aside and didn’t work on them again until a few days ago when I pulled them out and decided I was just going to do the fingers, dammit. So I finished that first thumb, closing it as if for a glove since he said he didn’t need the little flap for the thumb. Fine. Then I started the index finger and realized there was no way that works fit any human hand because there needed to be more knit on the hand before starting the fingers. I looked at the pattern and realized I have no idea where I was or what I was following because what I’m doing doesn’t line up with the pattern. :face_palm:

My hunch is that rather than put the thumb gusset stitches on waste yarn, I decided to just finish the thumb and move on to the rest of the hand and the fingers after. That kind of makes sense. But now I need to rip out the finger I did and get reoriented. Plus I think I closed the thumb off too soon. I don’t know. I am so fucking over these mitts/gloves/things. :face_with_rolling_eyes:

12/25 – I finished these late last night and blocked them before bed. They are DONE. Considering the issues I had with them in the making, I’m pretty happy with the finished result. My big hope is that they actually fit him and he’ll actually wear them after all this!

Will I ever make another pair? I won’t say no, but it’s going to be a while. LOL