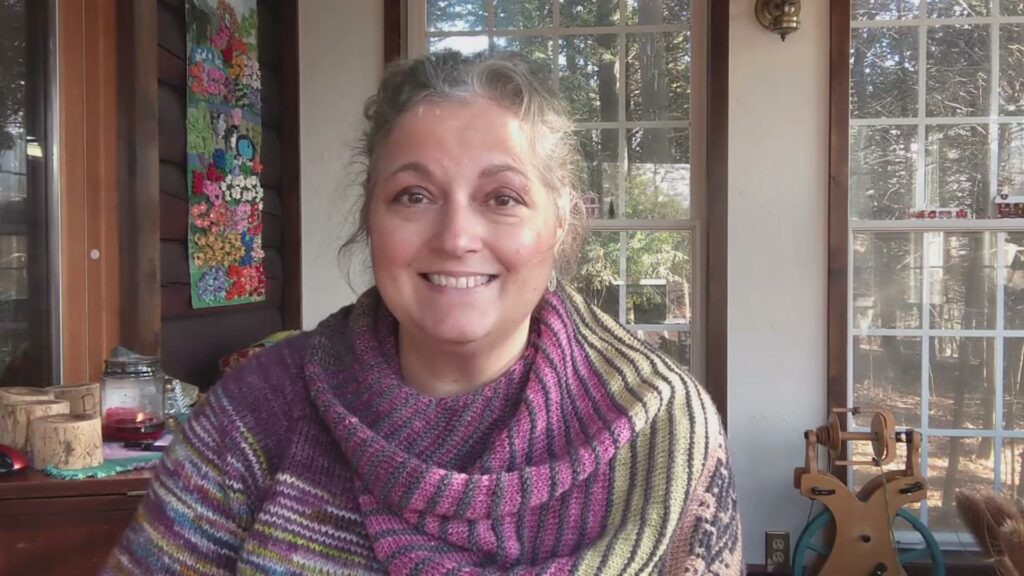 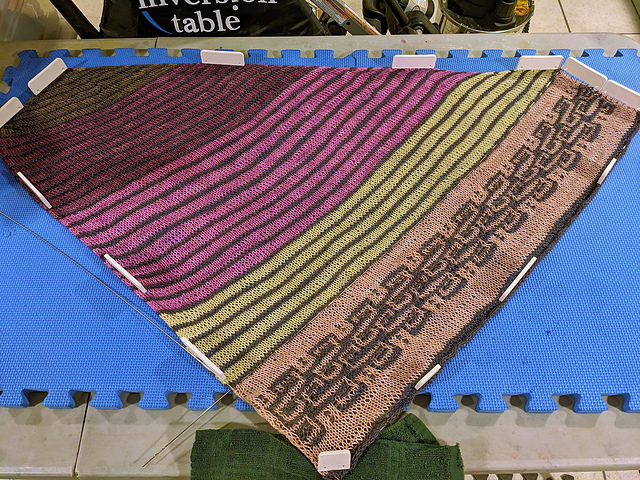 7/28 – I cast this on last week and just realized I never started a project page for it. Oops!

I’m using Secret Garden mini set in Bounce from my stash as the MC for this cowl, and doing the slipped stitch motif in a solid color, Soft Black in Bedazzled.

There’s no way this will actually get done in July, but it’s a fun project. I did have a false start when I realized that I wrongly assumed that the pattern started at the bottom edge and the fancy mosaic part would happen first, then realized no, it starts at the shorter part up by the neck. I had to rip out because I wanted the mini gradient to be lightest at the bottom edge and I’d started with the green. I wasn’t that far in though, so it wasn’t a big deal.

Also, the way the pattern is designed for working the edge stitches I found to not be super intuitive, so shortly into it, I decided to just slip the last two stitches at the end of each row with the yarn in front and then knit them on the next row, creating a tiny i-cord edge. Working out fine.

After doing a bit of math, I calculated that I’ll change the MC color about every 44ish rows. I’m going to have a lot leftover of some of the yarn, but it should work out fairly evenly color segment wise, I think.

I’m currently in the second color.

1/2/23 – After a hopeful beginning to the project and enjoying working with the yarn, this happened to be the project I had with me on my and Emma’s camping trip at the beginning of August when I got the phone call about Zach. This is the project I then worked on in the middle of the night that night, in the rain, in the mostly dark of the tent by lantern light when I couldn’t sleep and couldn’t make sense of the fact that my son was gone, especially after everything we’d been through with him in the recent past and thinking he was finally in a good place where he was safe and going to get help. He was hopeful that things would change, because he wanted a future with Kelly more than anything. He loved her so much. But the PTSD and the demons that haunted him had their final say, and those are the things I thought about as I cried and knit on this in the dark, in the rain, completely forgetting about the increases I was supposed to be making. I didn’t make a lot of progress, but I can see the rows where the increases are missing. And so this lovely knit will forever serve as a reminder of a moment in time when my life was irrevocably changed. When I lost a part of me forever. We often knit memories into our projects…usually good ones, but sometimes, projects end up housing the ghosts of the hard memories too. And that’s ok. It’s all a part of life’s experience, even though it really sucks.

Anyway…I picked this up here and there since then, but I only picked it back up with intention in the past couple of weeks, and it went right along, although I’d long foregone following the directions and was doing my own thing for much of the edges. The mosaic chart was interesting, as I don’t know that I’ve really done a mosaic project before, though I did take a workshop on it with Franklin Habit (I think?) through Vogue online during the pandemic. It was fun and I’d like to do more of it to get better at it.

My main change up in this project was using a consistent CC and using a series of minis for the “MC” portion. This resulted in me having to shift the decreases in the mosaic section so that they fell in the MC/minis rows, but that wasn’t a big deal. I enjoyed the i-cord bind off and feel like it was maybe a little different than how I’ve done it before, but I could be misremembering, as I haven’t done one in quite a while.

I also changed how I ended each row, as the sequence of slipping stitches and knitting and purling at the end of each row never became intuitive, so I ended up just slipping the last stitch or two (I think it changed over the course of the project :}) with the yarn in front. (Actually, I just noticed that I already noted this above. LOL)

Overall, I’m really happy with how this turned out. And in a weird way, it’s a comfort to my heart to have a tangible reminder of the loss that just happened to cross this project’s path. I know that sounds weird. I will never forget that night. 😥

(I just noticed that the pattern designer goes by “Knit for the Soul.” How incredibly appropriate, because that is what this ended up being. It helped my soul get through one of the worst nights of my life.)