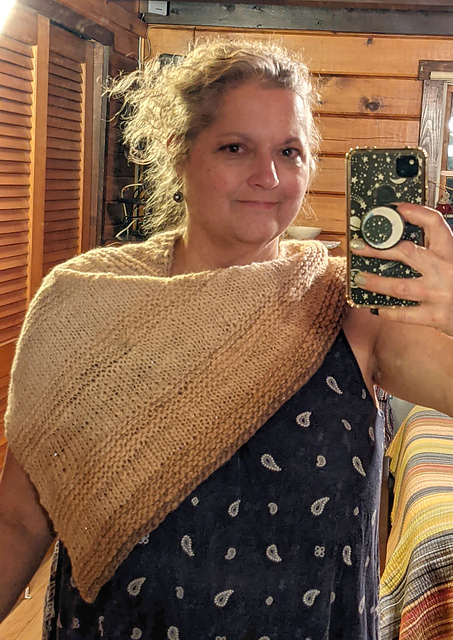 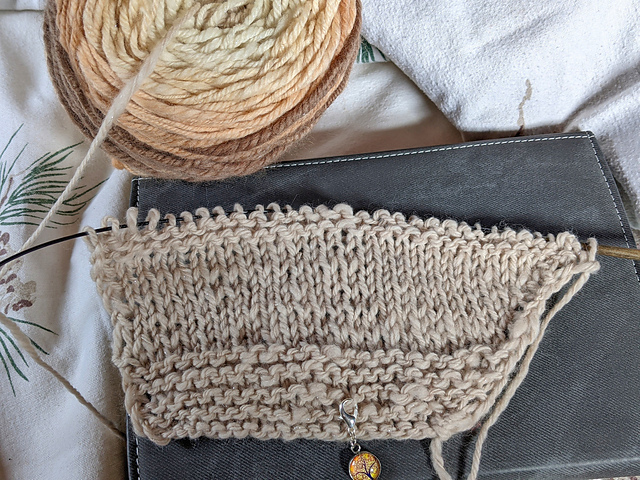 3/7/22 – I had several false starts with this yarn. After some thought, my initial pattern choice, Infinitude, didn’t seem like a good fit mainly because my yarn is not overly regularly spun, lots of poofy bits, and I feel like this pattern would work better with a smoother, more consistent yarn.

Then I found this set of patterns by Mary-Ann Lammers. My first try was with Plume, which is lovely and has chevrons (!!), but even modifying the stitch count for worsted versus the fingering it’s written for, it was looking very clumsy. So I cast on instead for Sable, which is written for worsted. I cast on using the count for the large, and I think I was using US9s at that point too, since this yarn is definitely bigger than a worsted at the brown end of the gradient (which wast the end I started with for Plume, as that one is worked from the wide end to the narrow end).

However, for Sable, you start at the narrow end, and I wanted to use the lighter end of the gradient for my start, so I did but didn’t go down in needle size. Between that and casting on for the larger size, it turned out HUGE. (The picture that’s up right now is the start of this first iteration.) I got quite far into it before I realized it would be a sweater front at the size I was getting. So I ripped it out and put it aside for a few days before restarting it last night. I did the smaller stitch count and went down to US8s, and I’m far happier with it now.

I’m also modifying how I’m doing the edges, as the instructions she gives for her edge just never clicked with me. I’m slipping the last stitch of each row with the yarn held forward and then knitting it on the next side. I am, however, doing the knit front and slip the back for the increases in the stockinette sections. I’d not used that technique before and I really like it. I’m making sure to exaggerate the stitches so as to pull extra yarn into them and not have the edge super tight.

I’m not sure how much of this gradient it’s going to use, but I am doubting if I’m going to get all the way through to the brown (which is probably just as well, considering how chunky that part is…I must have been in a hurry to finish spinning it).

Sadly, the rest of the gradient is a lot of very neutral colors without a lot of contrast, so it’s going to be a pretty plain looking cowl on its own, I may end up making a second even smaller one in a coordinating colored yarn that I could wear over top for the layered look like the pattern shows. We’ll see. One cowl at a time.

3/10 – I finished the cowl today after accidentally going about 3″ past where I was supposed to stop doing increases. It worked out fine though, and in the end I used all but about a yard of the yarn. The fact that I even was able to use any of the darkest brown is amazing since the yarn definitely got closer to bulky the further I went. I was clearly in a hurry when I was spinning this. LOL

Even though it is a few inches longer around the neck, it sits on me just right and the yarn, being very soft, just folds in on itself perfectly. All in all, I’m super happy with it!

(The only thing I could say is that my seaming leaves a bit to be desired, but that’s mainly because I was using the bulky end yarn to seam it. But it’s fine. Fine!! LOL)

I’ll get a better FO picture eventually other than the one with me in my jammie top.