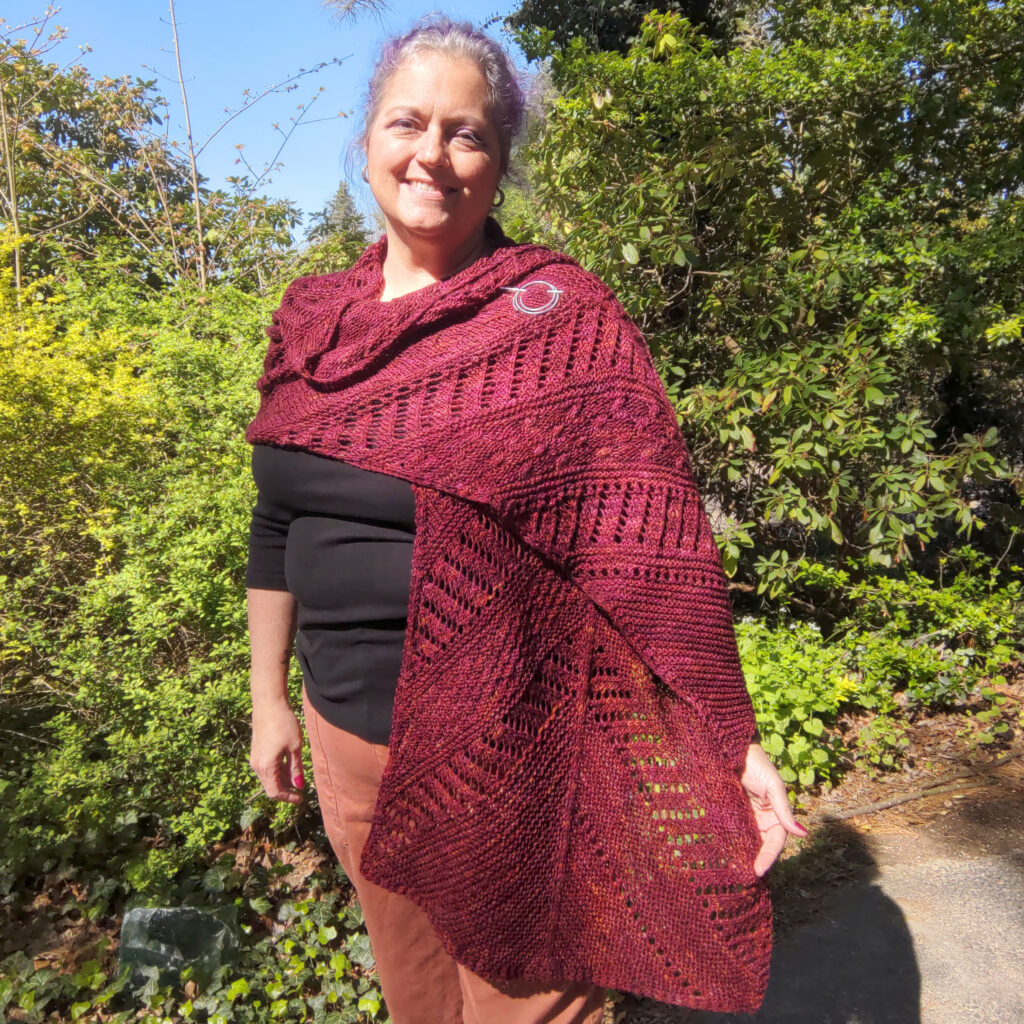 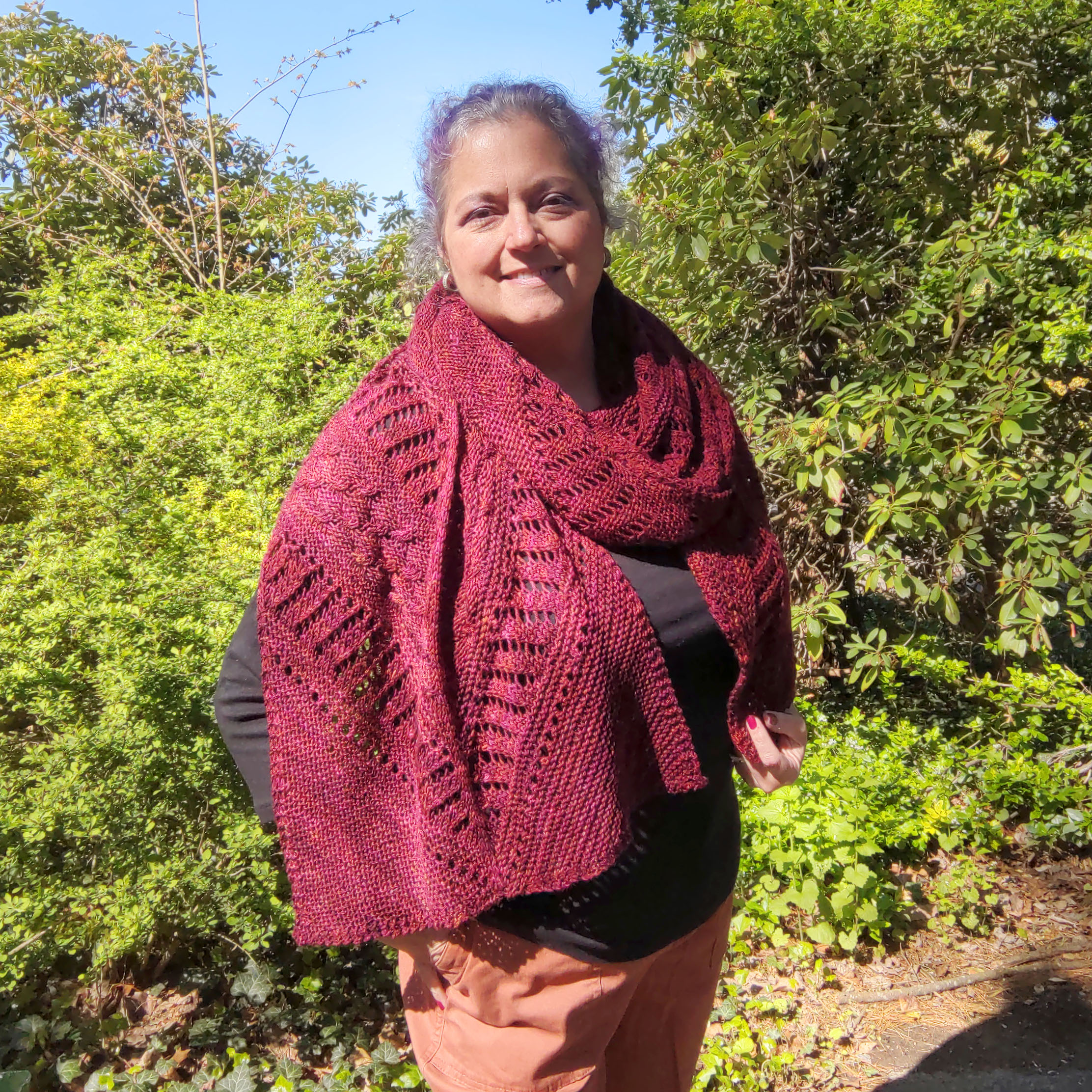 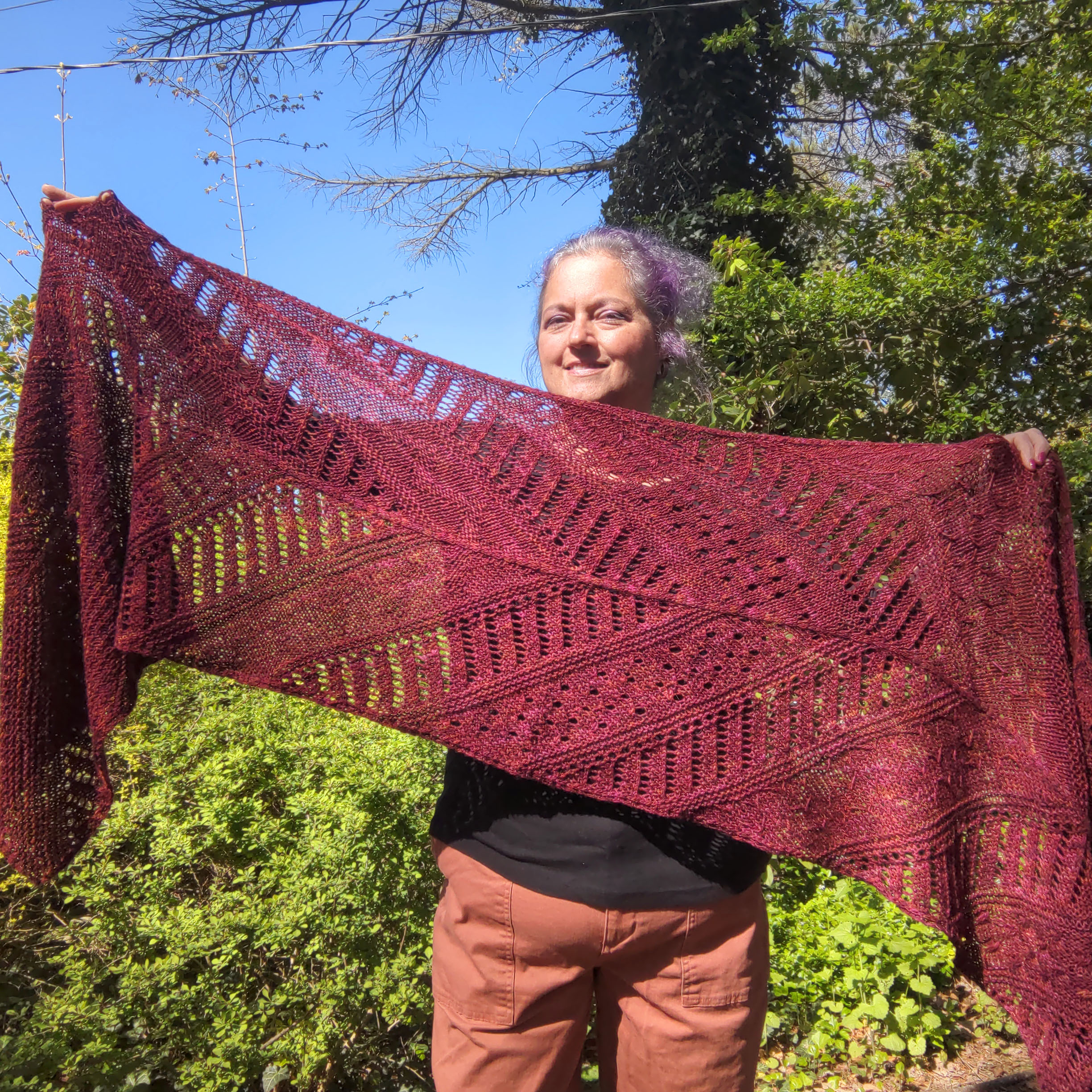 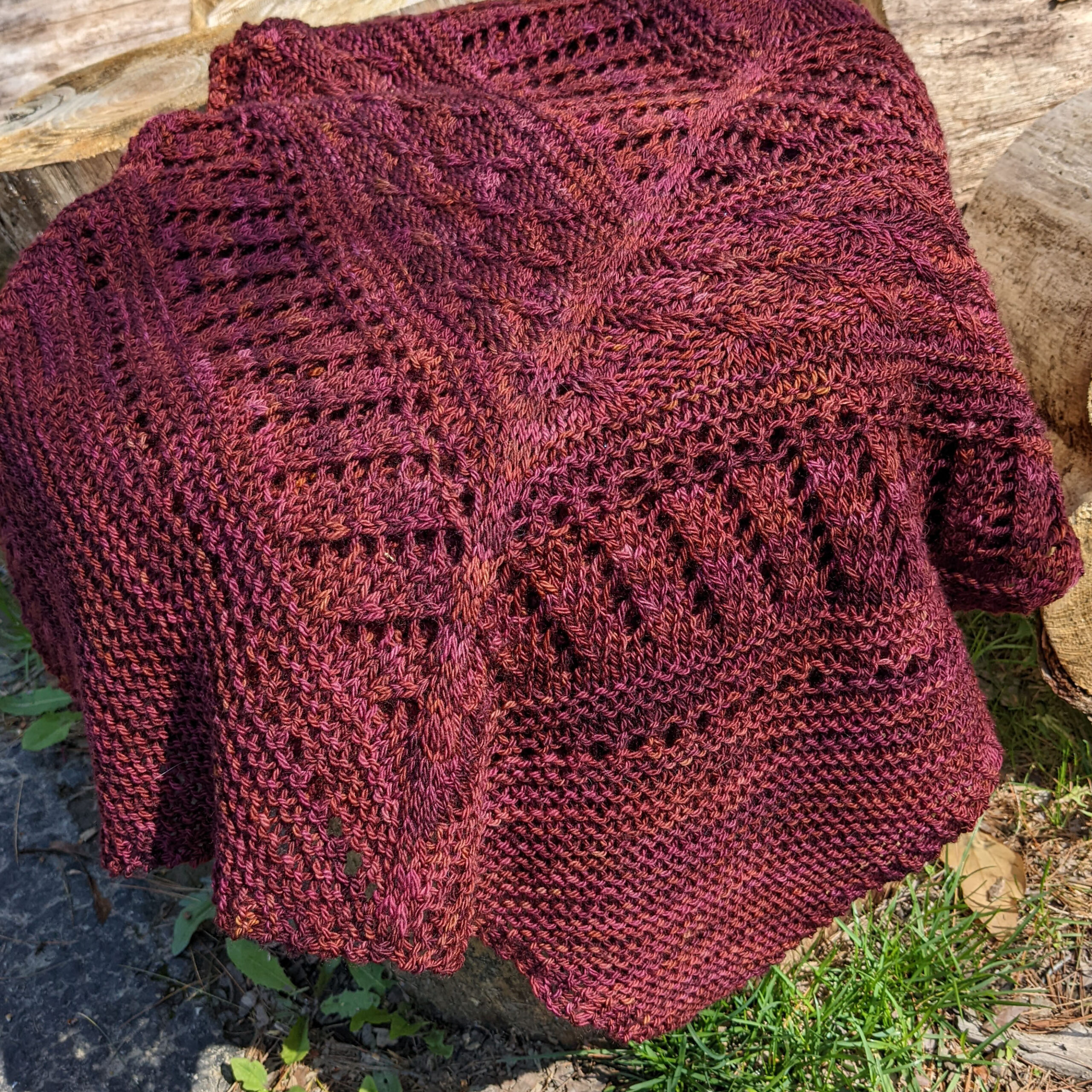 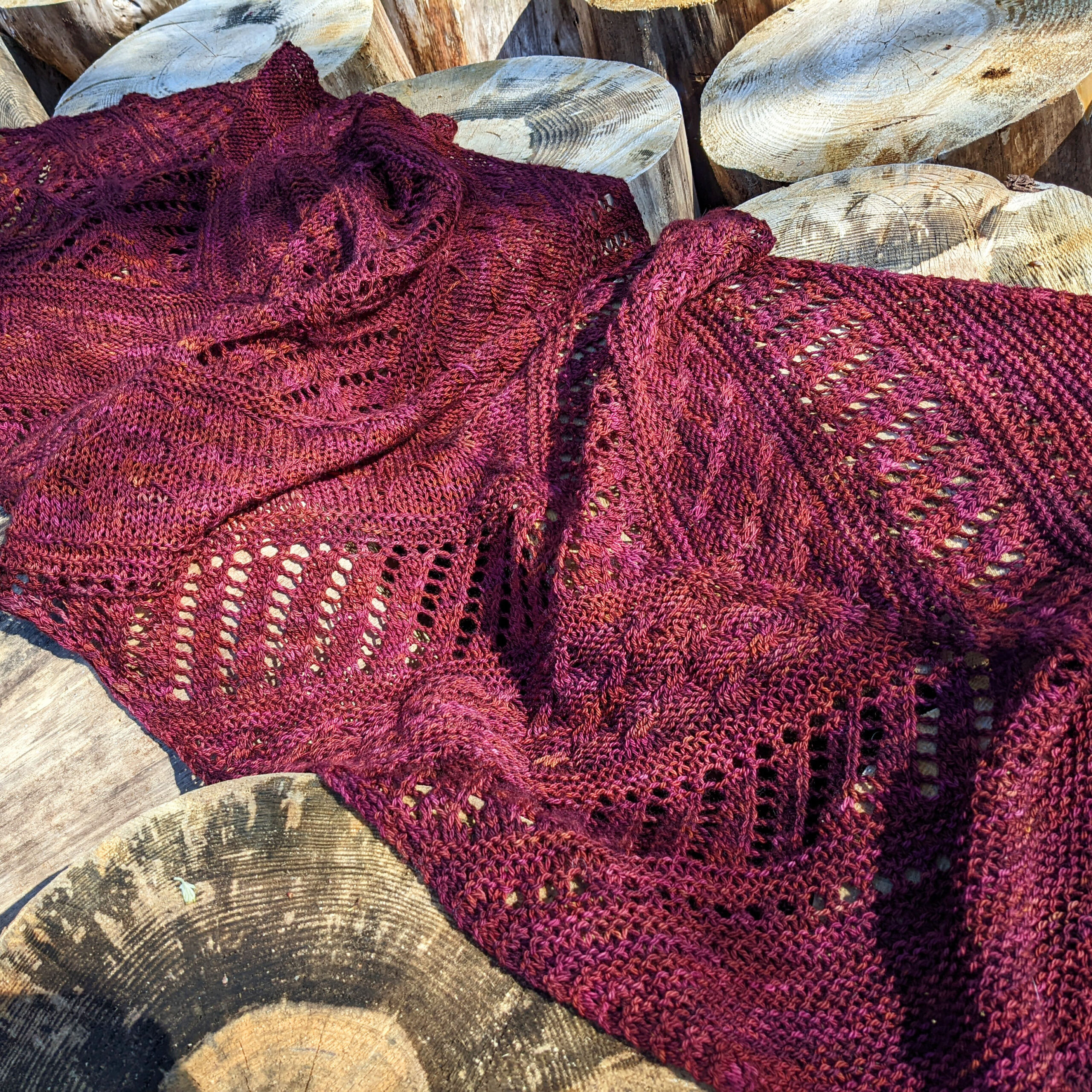 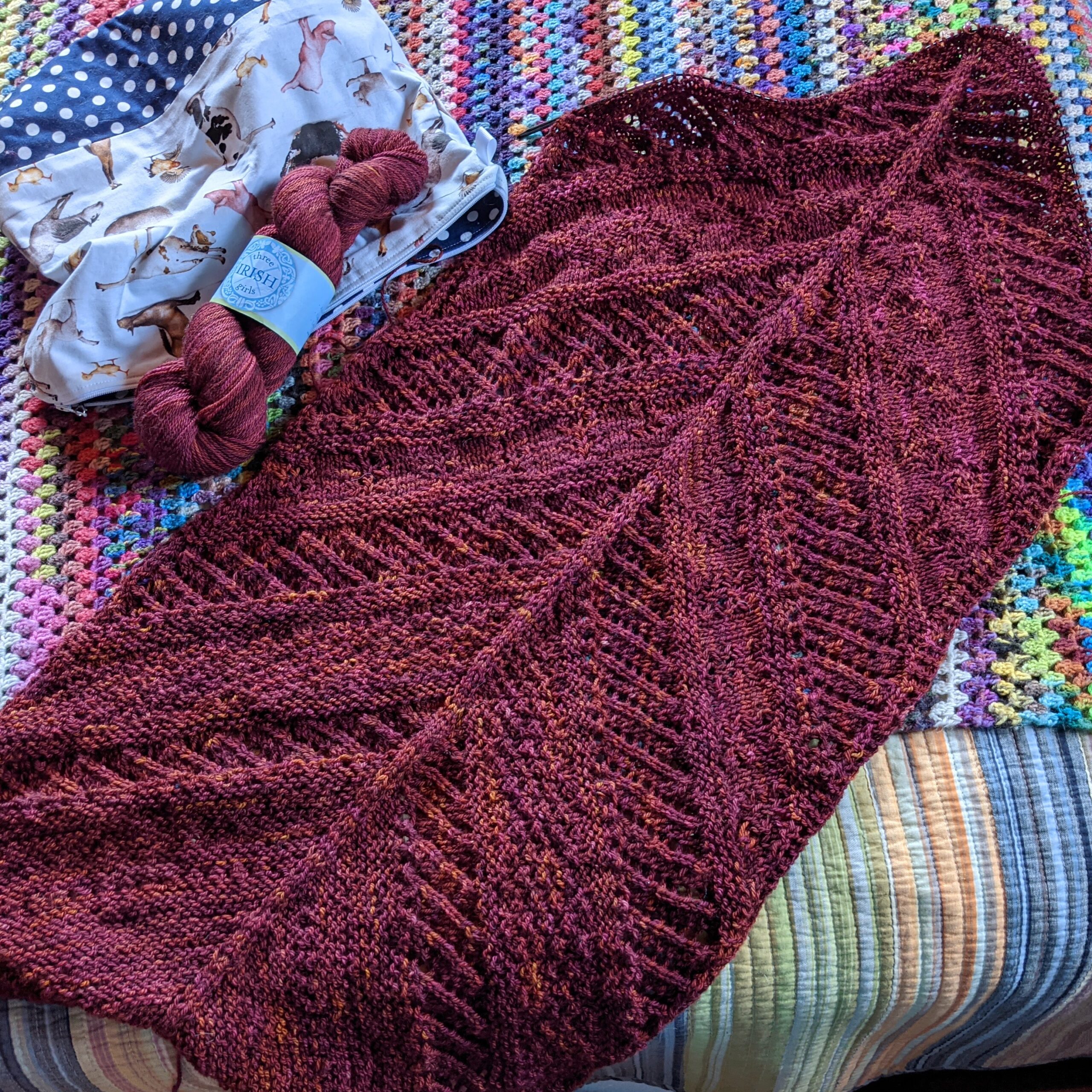 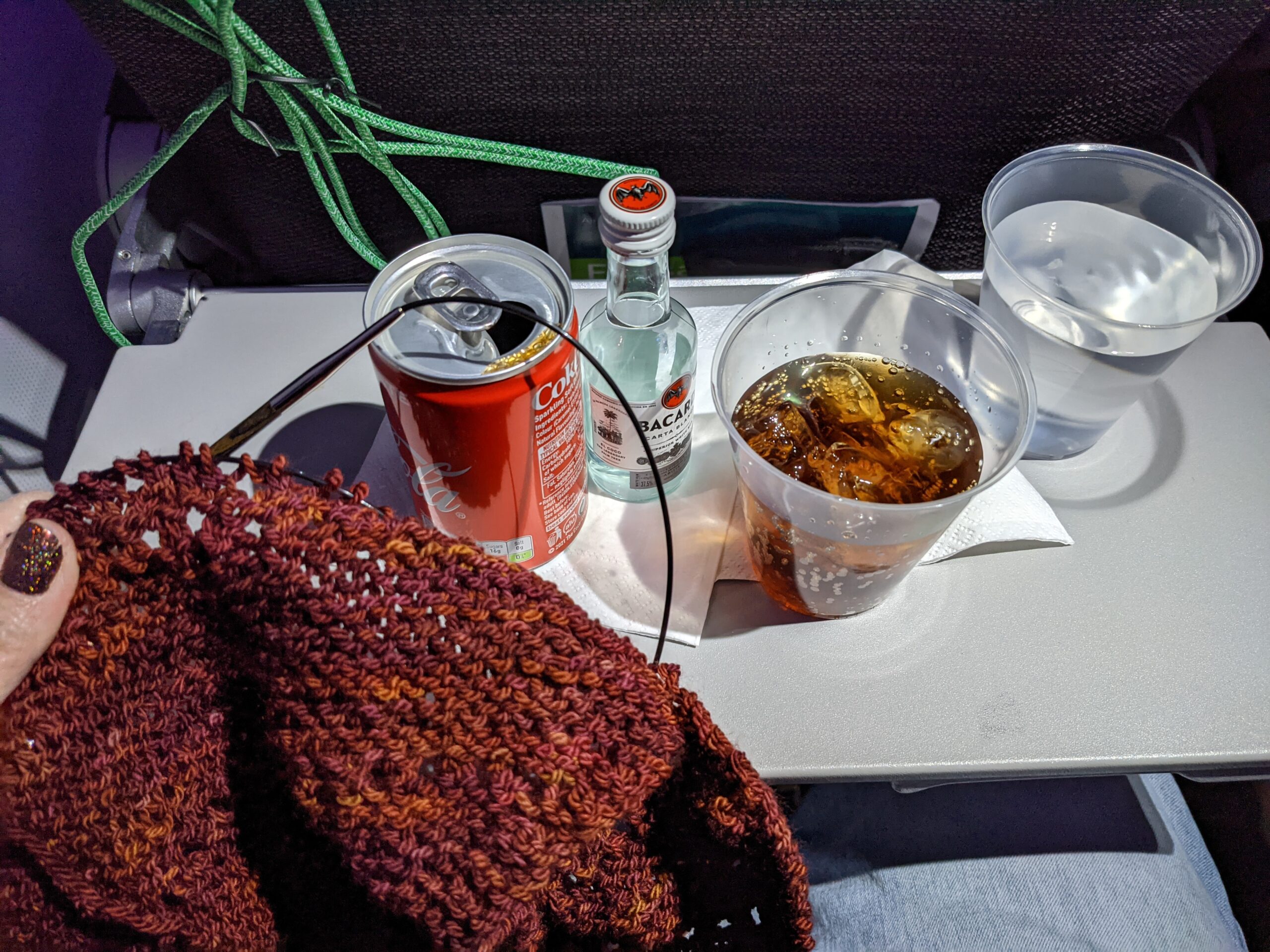 Yarn: Three Irish Girls Kells Sport Merino, Mulled Wine colorway – I used 340 grams, 1,088 yards. This is weird because I only had three skeins and had 20 grams left from my last skein, so clearly my skeins were not the 3.5 oz/100 grams that the ball bands said they were.
Pattern: Terra Maris, by Alina Appasova * (Pattern link goes to Ravelry)
Needles: US6

I was having a hard time picking a second project to take with me to work on during our Ireland trip. Usually I don’t work on even one project very much, but having so much flight and bus time on this trip, I figured I might do better.

In the end, I chose this yarn as it seemed very appropriate – Three Irish Girls! And it’s been in my stash for many years…probably a decade at least? I’ve cast on with it before but never found the right project. In fact I think I had one or two more skeins of it and I must have gotten rid of them in a yarn purging mood, as they were not with these three skeins.

After decided on the yarn, I looked for pattern that wouldn’t require a ton of focus but wouldn’t be boring either. I found this wrap pattern, and though it was done in multiple colors originally, I thought it would be cool to work in the single yarn color and make the stitch patterns be the focus.

I’m mostly using the pattern as a guide, like I’m wont to do. I followed it for the cast on number and the set up through the first couple of sections. Then after the first lace pattern section I did, I decided to alternate that same lace pattern every other section (along with three garter ridges) and then make up my own texture pattern for the alternating sections.

I made it into the second skein of yarn on the trip, and I really enjoyed working on it while we were touring around the west coast of Ireland. I hope I’ll keep up the momentum now that I’m home. Maybe it can be my project that will help me channel my happy memories of this trip!

Ironically, I took no pictures of either vacation project while I was actually there in any exciting location (though I have an airplane knitting pic of this one!). :}

5/10 – I finished this last week, 5/6, and I couldn’t be happier with it! It’s finished size, blocked, is 88″ long and 19″ wide. It’s drapey and lovely and was nothing but pure joy to work on! And that it has vacation memories knit into it makes it even better. 🙂