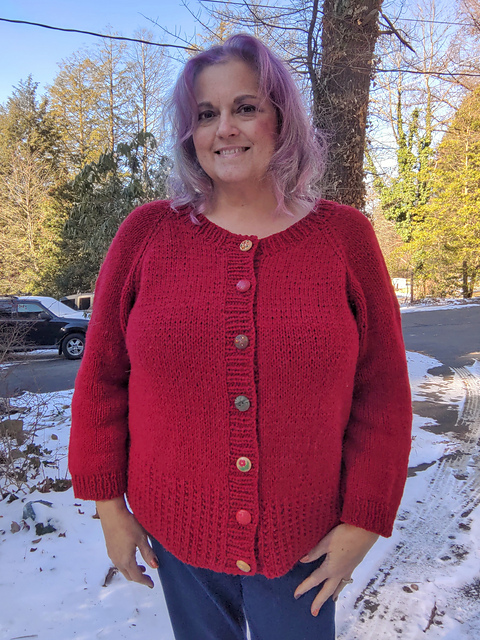 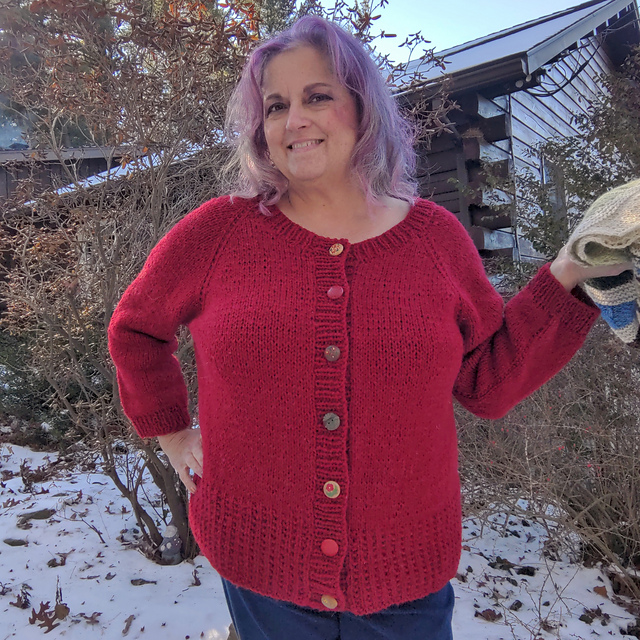 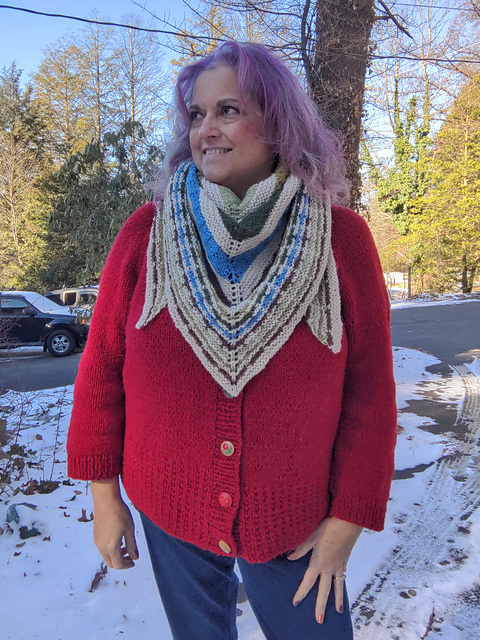 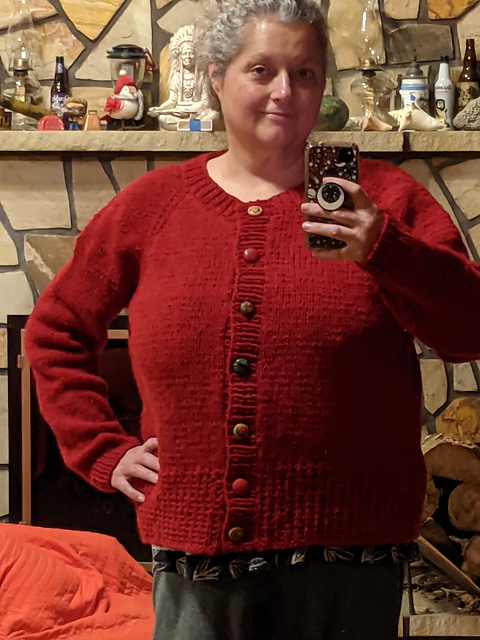 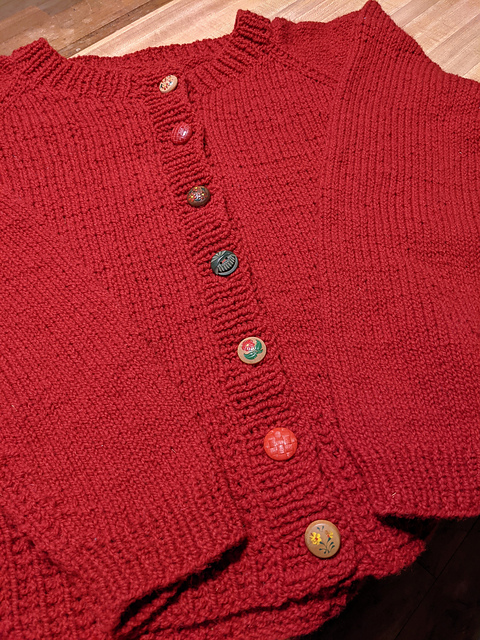 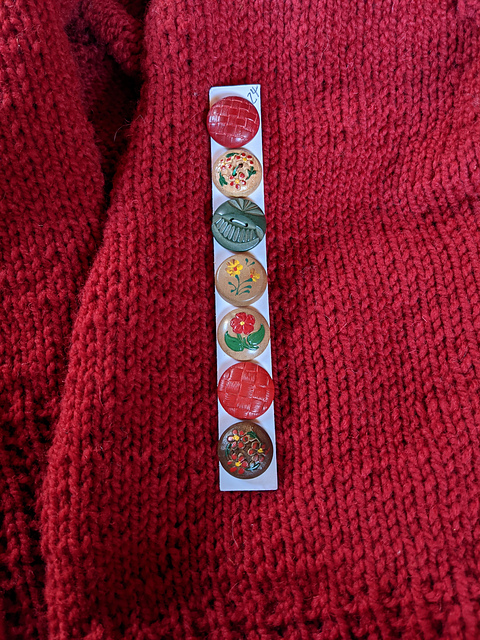 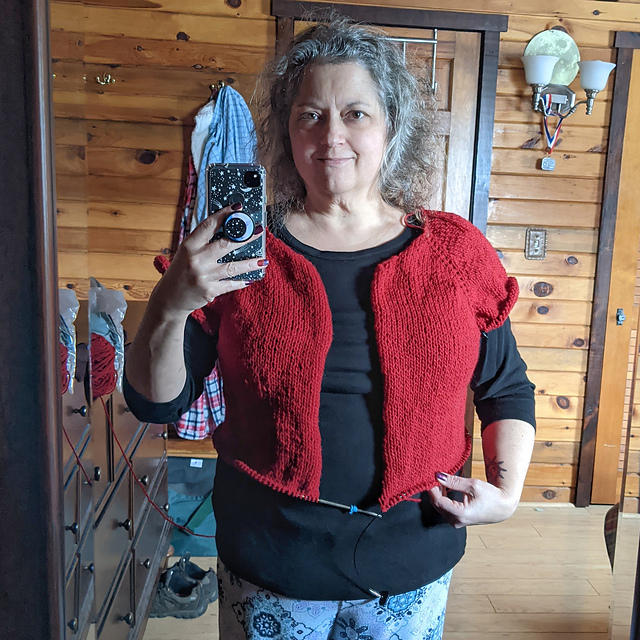 Buttons from the vintage button vendor that’s usually at Maryland and Rhinebeck…Dusty’s maybe?

1/29/21 – Cast on this morning. First time using this yarn. It’s quite toothy, necessitating a change in how I usually tension my yarn while knitting so it doesn’t drag on itself. I didn’t notice it as much in my swatch, so I’m hoping it doesn’t affect my gauge.

Swatch: I got approx. 15.36 stitches over 4″. Going down another needle size isn’t an option (see aforementioned toothy issue), plus I think it would affect drape. My swatch has a nice drape, and the yarn did bloom, so I’m hoping to be able to adjust things if needed to accommodate size.

I’m hoping this goes as smoothly and quickly as my Felix did last fall, especially since it’s a pretty hearty yarn.

5/9 – Ok, so I finished the body of the sweater ages ago. I’m having sleeve issues. The first try ended up being WAY too large in the armhole. The second try is WAY too small due to my gauge issue of knitting circularly versus flat. I think the real issue is that I should have stopped my raglan increases sooner. And also need to go up a needle size for the sleeves.

I’ve lost my energy for this project right now, and I’m half tempted to just rip the whole thing out and use the yarn for something else someday. It’s not going to be the red sweater I’d originally envisioned anyway, as the yarn is much heavier than I’d want to wear with the dress. I don’t know. I’m going to hibernate it for a while and come back to it at a later time. Maybe I’ll have a better perspective.

Honestly, at this point, I’d like this to be done, not perfect. Not even close to perfect. Just done and wearable.

2/25 – First sleeve finished. I thought I wouldn’t need to add more decreases before the cuff, until I started knitting the cuff and realized it was going to be HUGE, and had a “what was I thinking??” moment. Ripped back the last 3″ of the sleeve and proceeded to do a series of six decreases, one every fourth fifth round. Then I switched to US 6 needles and did 1×1 ribbing for about 1.5″ and bound off. Feels perfect. The sleeve isn’t too tight to wear something underneath but also isn’t too roomy. (I did need to do one last decrease in the first ribbed row, in the form of a p2tog, as I had an odd number of stitches at that point.)

The second sleeve is underway, and I remain cautiously optimistic that this sweater will be done, at least the knitting, by the end of the month. Fingers crossed!

2/28 – Done! I’ve woven in all my ends and have my buttons picked out. I’m going to soak and block it this morning with the hopes that it’ll be dry and I can put the buttons on this evening.

As it is now, I’m pretty happy with the fit. The sleeves are probably an inch longer than what I’d prefer, but not so long I feel like I’ll need to fold them up. The neckline is a little lower than I was expecting, though it was hard to tell when I tried it on since the button bands weren’t on yet either. It isn’t floppy at all, it just goes down lower in the front than I expected. I also haven’t tried it on yet with a bra so I’m sure that’ll make a difference.

Honestly, I am not quibbling about these minor things. The sweater is awesome and I’m so glad to have it finished, and by the end of Feb. (a year after starting, granted, LOL) even! LOL It is definitely a substantial sweater with this yarn, and considering I paid less than $6 per skein with the WEBS discount, and I used just under 5 skeins, it was a pretty affordable sweater. (I paid $24 for the set of vintage buttons that are going on it, so that’s kind of ironic that the buttons cost almost as much as they yarn. :})

BTW, I got the buttons at Maryland Sheep & Wool some years ago at a vendor who has nothing but vintage/antique buttons…Dusty’s Vintage Buttons, maybe? Love her booth!

3/7/22 – I tried to take nice FO pics the other day, but I realized then that the sleeves are definitely too long, and since the yarn is so dense, they bunch up lumpily rather than push up smoothly. Even turning up the cuff looks awkward. So, I do need to redo the cuffs, and I will do that eventually, but it’ll probably be on a day when I’m truly feeling the bug to do it. Until then, I’m not worrying about it. The weather is warming up now, and I doubt it’ll be cold enough for me to wear this sweater much the remainder of this winter anyway.

I really enjoyed working with this yarn, but I don’t think I’d choose it again for a sweater. WEBS had it listed as a worsted weight, which was why I chose it, but it is listed everywhere else as an Aran weight, and it definitely is. I’d like to try another B&L yarn sometime though, either one of their true worsted weights or even a sportweight.

11/7/22 – This morning I ripped back the sleeves to the weird angly point where I’d done rapid decreases and just went down to 6s and did 10 rounds of 1×1 ribbing and bound off. The sleeve length is perfect now, just at my wrist above my hand. The sweater fits just right now, and I’m so happy with it overall! It’s amazing how the sleeves being too long really affected the hang on the sweater in general, especially considering the sticky, stiff nature of the yarn.

Combined I removed 33 grams of yarn.

It is styled with my Zen Shawl in the third picture.