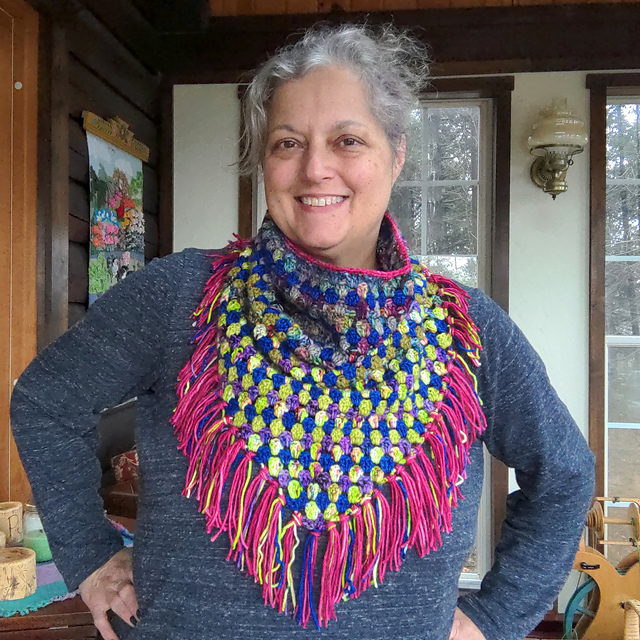 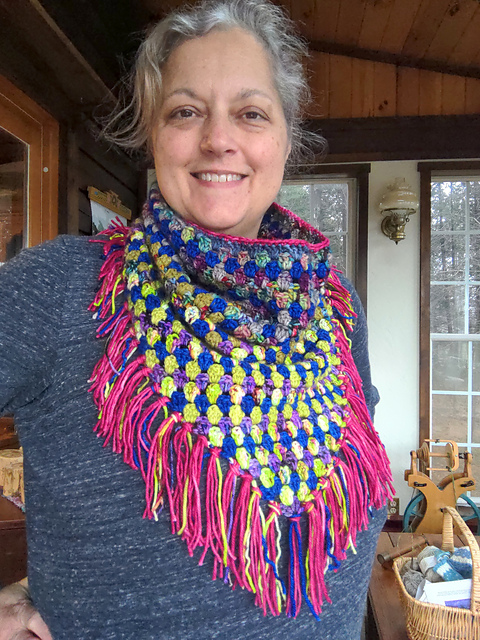 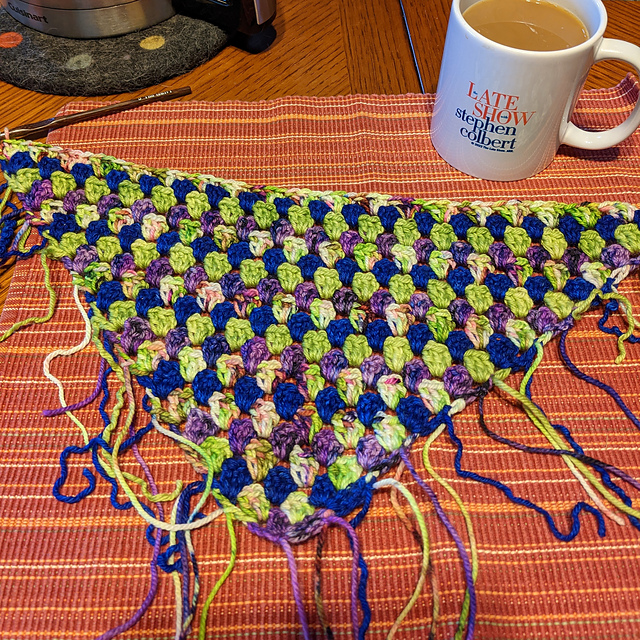 Yarn: DK and worsted weight leftovers from my stash – used a total of 185 grams

Pattern: Leah Cowl, by Susy Knotsosquare (link to Etsy shop where you can purchase pattern)

I’m using this as a stash buster project for my basket of DK/worsted weight leftovers.

I ended up making significant mods to this pattern after I got through the initial triangle. (I also did one less row in the triangle than the pattern called for.)

After joining the triangle, I only worked 14 rounds rather than the 36 (!!) called for. I guess it was meant to be super scrunched down, but a) this is a pretty dense fabric and that felt like a lot around my neck and b) I have a rather short neck to begin with and don’t like feeling choked. 14 rounds was more than adequate for the amount of fabric I needed to provide cozy warmth.

I did attempt the top ribbing as written, but I wasn’t happy with it, as it seemed very bulky to flared out, even though I did go down in hook size. I ended up simply finishing the top edge with a round of single crochet in the cherry pink contrast, and I really like how it looks.

I also attempted to do the edging as called for around the lower edge. I wasn’t happy with how it looked either, though in part that might have been because I was crocheting alllll of my ends into the edging, holding them to the back. It didn’t look super bulky, but it also didn’t look great. Still I tried a few different ways of doing edging before finally deciding that fringe would look awesome, allowing me to be lazy and not weave in those ends, and it would also use up more yarn, which was the main goal of this project. In the end, I’m not sure applying all of that fringe saved time over weaving in ends, but I LOVE how it looks. I love me some fringe, yo!

I used a total of 185 grams of yarn in this project. I have it listed as FDW Bona Fide, but it was not all that but that’s just as a place holder to represent the grams I used. I used a variety of yarn leftovers, handdyed and commercial, some of which I can’t even remember what it was.