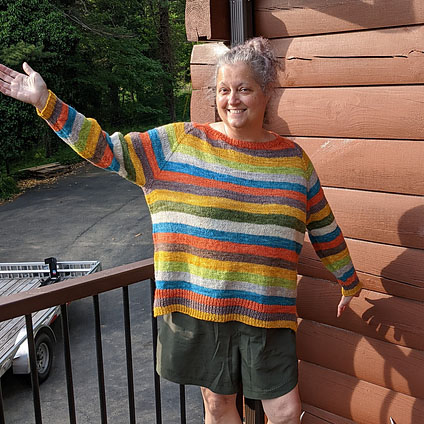 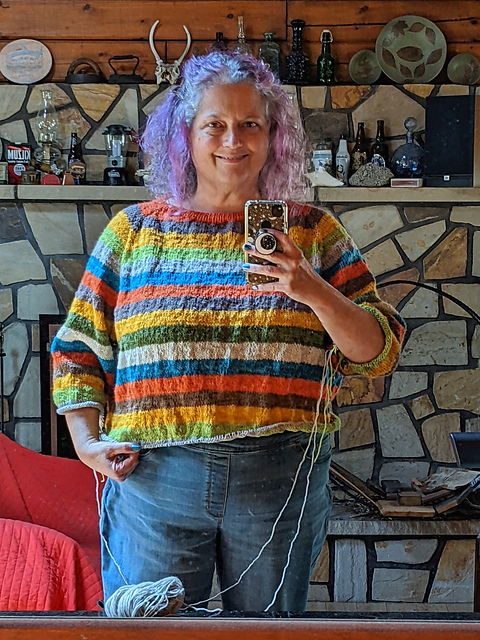 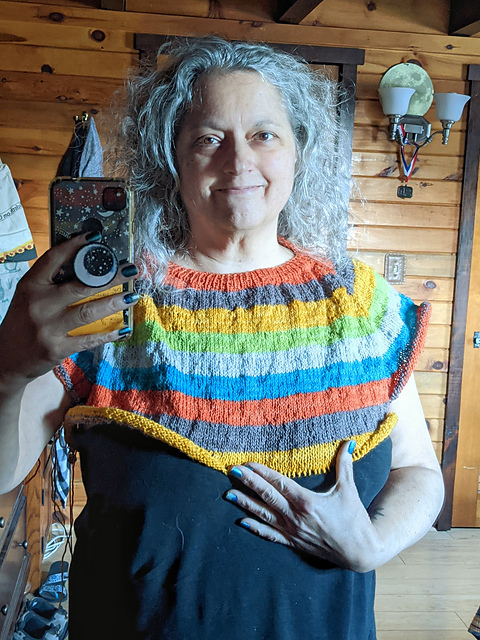 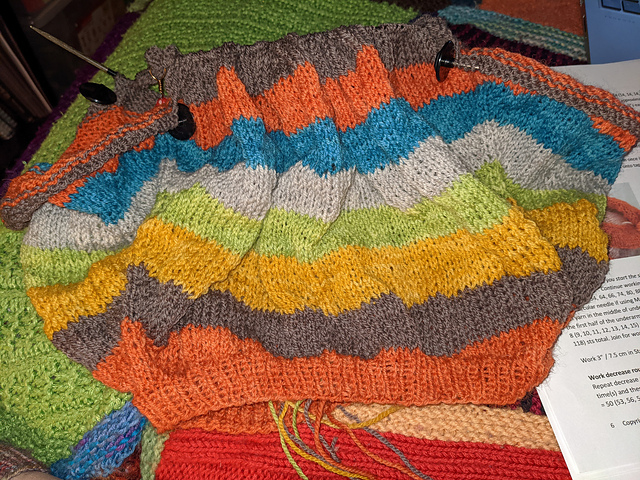 3/30 – I cast this on on a whim, after staring at a project bag filled with large Ridgetop leftovers,which I’d been using to make the little crocheted birds back before Christmas. I thought they’d be great fora striped sweater, and I thought I’d do Andrea Mowry’s Stripes pullover, but then I found a copy of Suvi Simola’s Simple Stripes pullover that I totally forgot I’d purchased (I was going to make it with my indie dyer swap Advent minis, but I didn’t like how it was going so I frogged it early on). Since I already had the pattern, I decided to use it instead.

I didn’t bother to weight my Ridgetop partial skeins before I started, so I won’t really have a way of knowing exactly how much I used of each colorway (though if I weighed them now, I could probably extrapolate…we’ll see if I think to do that).

The main colors I’m using are: Ember, Peat, Warm Honey, Lime, Light Gray (darker than Wisp but not quite Graphite), and Peacock. I’m going to sub in other colors occasionally as well, because I don’t think I have enough of all of these to do the whole sweater. I have smaller amounts of Lichen (I think?), Wisp, and a red/brown that I don’t remember what I’d called it. And there are a couple of others. They may not all get used, but between them all, I’m sure I have enough for the sweater.

I split for the sleeves last night and tried it on this morning after I had a full stripe below the split. It looks like it’ll fit fine. Yay! (Didn’t bother doing a swatch because I like to live on the edge.)

5/20 – This definitely was not done for Ireland. But I’m getting closer! I tried it on yesterday for the first time since the last picture when it was at my bust, and I’m now about 4.5 stripes away from being finished with it. I’ll work through the blue stripe and then split for the split hem for the final 3 stripes. That should put it down around the bottom of my pants fly, which will be a nice length. Not being SW, it shouldn’t grow in length when I soak it. If anything, it may lose some length. We’ll see. I may do one less stripe in the sleeves. Soooo close!

And it fits wonderfully! Maybe 4″ positive ease in the chest but not too roomy in the underarms. I’m continuing to do sleeve decreases after every fifth round and will do that until I start the ribbing.